…and the great Venus/Mars conjunction:

The United States will experience its first PLUTO RETURN since its inception on February 20, 2022. This will be followed by two additional returns this year on July 11 and December 28, as Pluto proceeds with its retrograde and forward motion. While opinions differ on which of the returns is the most significant, this article is specifically about the first return. I see it as the most critical one, not only because it sets the tone for the whole process, but also because it coincides with a Venus/ Mars conjunction on the same degree.

On the day of the first Pluto return, Mars/Venus are conjunct at 19 Capricorn, and about two weeks later, on March 3, 2022, both join Pluto on the 27th degree Capricorn for a powerful cluster on that degree (see chart below for the triple conjunction).

Additionally, the Pluto return coincides with a Neptune opposition from 22 degrees Pisces to 22 Virgo, square natal Mars at 21 Gemini. In April, Jupiter will join Neptune at 23 Pisces, intensifying this opposition and square. PLUTO-NEPTUNE CYCLES The Pluto and Neptune cycles are interconnected at a ratio of 2:3, which means that every two Pluto returns, coincide with a third Neptune return, while the first Pluto return coincides with a Neptune opposition—as it is the case with the USA chart. Pluto and Neptune cycles are fascinating and profound as they both represent deep collective undercurrents that fertilize global trends; Pluto represents the power to transform crisis into opportunity by means of personal endurance and resourcefulness, while Neptune represents what is fated—beyond human control, and thus, the refuge in ideology to rally spiritual support in times of struggles. When Pluto and Neptune interact, fate and free will collide: “The serenity to accept the things we cannot change (Neptune), and the courage to change the things we can (Pluto).” 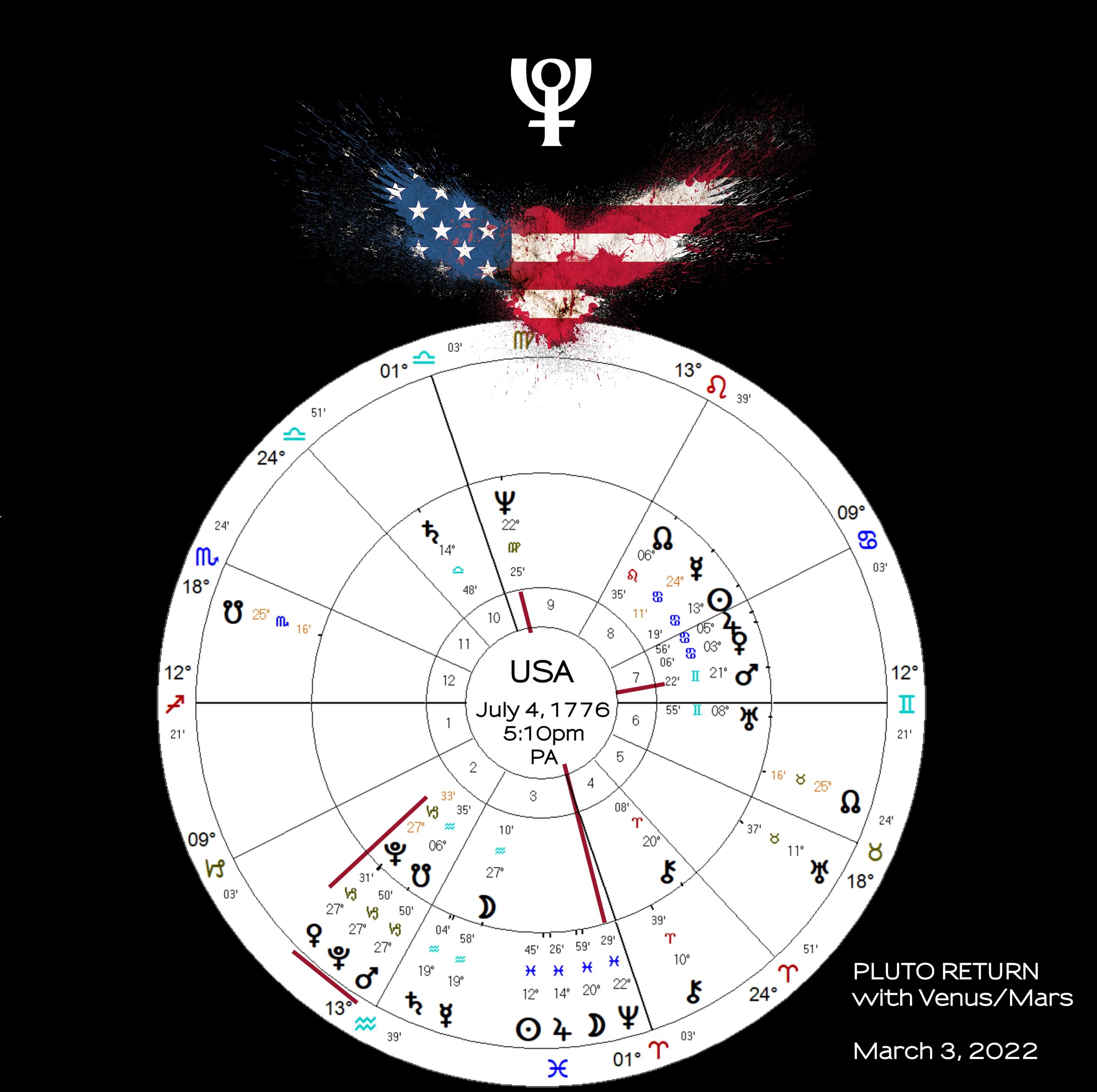 Pluto in the USA chart at 27 Capricorn, on Mars’s exaltation degree, describes a nation that emerged from the defiance of an old system to overcome tyranny and the abuse of authoritarian power, with the aim to reconstruct a more robust system with greater liberties. Saturn, the dispositor of Pluto, in Libra, captures the yearning for fairness and balance of opportunity. The US constitution and Bill of Rights followed in 1787-1791 as Pluto progressed by transit into Aquarius, the sign representing emancipation and the rise of minimum standards.

In the Sibley chart version of the USA used in this article, Pluto lands in the 2nd house of resources and material sustainability. Its placement there captures the financial ambition that strongly represents American entrepreneurial spirit and the capitalistic system that encourages growth in whatever ways possible—wealth as a reward of hard work—as Pluto in Capricorn as can be. We note emphatically that one of the incentives for the American Revolution was to gain freedom from the unjustifiably elevated taxes coming from the dominating British crown, a struggle signified by this 2nd house Pluto—the urge to confront corruption and support financial empowerment (in this case, autonomy).

The current Pluto transit in Capricorn began in 2008, a year that saw both a profoundly jolting economic crash, and the election of the first black president. (The dispositor, Saturn was also opposing Uranus at the time, adding to the climate of social change). Since 2008, Pluto’s traverse through the sign of Capricorn has accentuated an ever-growing distrust in all institutions. Exposure of abuse and manipulation, whether it was through the financial bubble burst, the Occupy movement, NSA surveillance scandal, church pedophile scandals, the #metoo movement, or Black Lives Matter, has resulted in loss of trust in all institutions: the banking system, corporations, churches, the media, the police, to name but a few. We were called to review our history books to correct the racially biased account of events, clearly Pluto exposed the shadows of those in position of authority and who gets to tell the stories (Capricorn).

Recently, with dispositor Saturn in Aquarius—justifiably or not—the COVID-19 crisis has galvanized a robust anti-vaccination movement that has put the credibility of the medical and pharmaceutical institution, and even scientific establishments, into question. The extent of such distrust in institutions engendered both necessary reforms and also bizarre ideologies; we can remember the Flat Earth movement accusing Nasa of faking images of a spherical earth—purporting that a huge abyss surrounds the boundaries of pancake earth. Each transit has its glorious and embarrassing moments, but at the core, just like the United States’ founding fathers did in 1776, Pluto in Capricorn has an evolutionary purpose to question, expose failures, and either repair or destroy systems with the aim of building more ethical, reliable, and credible ones. Statues fell in both 1776 and 2020.

While the precise Pluto return moment occurs on a specific day, it is already in process and will continue to be long after the D-days. Notwithstanding, with the simultaneous Venus/Mars conjunction to the return in late February and early March, we certainly must pay attention to the specifics. Venus and Mars as a pair represent the fundamental dynamics of homeostasis, the need for equitable give and take, and general balance of power (romance or commerce)—they affect both the economy and alliances. Transits in Earth signs tend to stimulate a need to rectify excesses and to opt for more conservative (safe) measures. They are, therefore, typically engendering a “contraction.” It would be no surprise to see the month of February and then March as main indicators for a sobering episode in the economy and foreign policy departments of the country.

Following the COVID-19 crisis bailouts, unemployment crisis, and financial relief programs, it is obvious that the whole world is in massive debt, on both a governmental and individual scale. While individuals and institutions of substantial wealth have known how to take advantage of the global crisis for yet more colossal gains, most people are surviving through financial aid and loans. In the astrological backdrop, Jupiter galloping towards Neptune in Pisces early 2022, represents a risk of inflated and manic optimism that balloons debt habits to even greater extends, only to subsequently spur a backlash, and even collapse (see article about the Jupiter/Neptune conjunction by Maurice). Combined with the timing of the triple conjunction on Pluto, it seems quite plausible that this sets the stage for that contraction.

In the Sibley USA natal chart, Neptune in Virgo in the 9th house captures the idealism of expansion and the freedom of spirit of the country. It shows in the aspiration for religious freedoms, the pursuit of professional success (Virgo = employment), and the general idealization of everything large scale and expansive in the American spirit. The 9th house is associated with foreign culture, and Neptune here shows both sides of this equation—first as a country that represents an ideal for immigrants flocking from all corners, and on the shadow side, a tainted history of racial imperialism, that has proven particularly damaging for native Americans and black people. The previous Neptune opposition from Pisces occurred in the late 1850’s, a time of tremendous tumult that resulted in the civil war (1861). The movement to abolish slavery, initially sabotaged by President Buchanan, was resurrected by Lincoln’s election in 1861. Racial issues were indeed on the forefront at the time. Neptune entered Pisces in 1849 at the onset of the California Gold Rush, capturing the idealism of promise for better prospects and quick wealth beyond existing horizons. The yearning for the formidable and expansive is indeed a recognizable Neptune in the 9th house urge. On the flip side, the gold rush had a devastating effect on the native American population and the environment. (Pluto was at the time in Aries, square natal Pluto in Capricorn) The current Neptune – Neptune opposition (square Mars in Gemini) has already brought cultural issues to the forefront, particularly since May 2020 with George Floyd’s killing and Black Lives Matter protests.

This transit can also affect international trade and foreign policy agreements, as well as racial issues. With both Pluto in the 2nd house and Neptune in the 9th house, we suspect that financial matters (2nd house) are impacted by foreign policy measures (9th house). On a positive note, this can suggest that new alliances and trade agreements will help revitalize the economy. On the somber side, the Neptune opposition can spur an international crisis that negatively affects financial prospects.

With Pluto in an earth sign and house, affecting material concerns, and with Neptune and Jupiter in Pisces representing a yearning for spiritual solace, we see an interplay between spirit and matter. When material security is compromised, spirituality can turn into a refuge, or an escape. A recent example capturing these dynamics occurred during the pandemic, when people, disoriented at the face of deep existential uncertainty and this collective angst, galvanized the emergence of outlandish movements, such as cultish Q-Anon. When struggles occur on the material plane, ideology and spirituality can become indeed an escape. Recently (Nov 2021), Q-Anon followers were lining up at the assassination site of President JFK in Dallas, to see his son Junior resurrect from the dead in order to serve as a Vice-President in the 2024 Trump administration. This is a full-fledged manic episode, and Jupiter was not even in Pisces yet at the time!

Will the Pluto return represent a new stage of collapse to destroy the remains of a damaged system? It should certainly not be underestimated in the light of the multiple factors described here in place. People who have nothing left to lose are hardest to control, and we can only hope enough wisdom is available to avoid this worst-case scenario. Jupiter in Pisces and its subsequent ingress into Aries captures the untamed spirit of the people, similar to a caged animal who breaks free and is now unstoppable. In other words, 2022 has to be treaded carefully because the extremes of contractions and subsequent compensating “manic type” behavior, are expected. The wise will know how to navigate these wild currents by supporting reforms that are both sustainable, and yet beneficial to the majority of world citizens who are doing their best to get by. Humanity does not have to learn the hard way, though it often does.

© 2021 Maurice Fernandez – all rights reserved
No part of this article may be used without written consent of the author, unless credit and reference to this website are provided.

The Future of Astrology

Our brains are wired to reject uncertainty. It explains why astrology is taking off in the pandemic

The Nodal Axis of the Moon

Astrology as a Profession

The 12th House and its Mysteries Interview with Astro Viktor

Astrology in the Southern Hemisphere – with Julija Simas & Gemini Brett